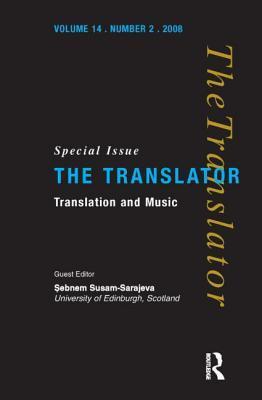 Difficulties associated with issues such as the musicality of lyrics, the fuzzy boundaries between translation, adaptation and rewriting, and the pervasiveness of covert or unacknowledged translations of musical elements in a variety of settings have generally limited the research in this area to overt and canonized translations such as those done for the opera.Yet the intersection of translation and music can be a fascinating field to explore, and one which can enrich our understanding of what translation is and how it relates to other forms of expression.

This special issue is an attempt to open up the field of translation and music to a wider audience within translation studies, and to an extent, within musicology and cultural studies.The volume includes contributions from a wide range of musical genres and languages: from those that investigate translation and code-switching in North African rap and rai, and the intertextual and intersemiotic translations revolving around Mahlers lieder in Chinese, to the appropriation and after-life of Kurdish folk songs in Turkish, and the emergence of rockn roll in Russian.

Other papers examine the reception of Anglo-American stage musicals and musical films in Italy and Spain, the concept of singability with examples from Scandinavian languages, and the French dubbing of musical episodes of TV series. The volume also offers an annotated bibliography on opera translation and a general bibliography on translation and music.

Comments
Comments for "Translation and Music":